One of the most widely misunderstood forms of welding is GMAW. Gas Metal Arc Welding is more commonly known as MIG. MIG is an older term used to refer to Metal Inert Gas(MIG) welding. Originally it was created to refer generically to a gas shielded form of welding with a semi- automatically fed solid filler wire wrapped on a roll.But as the “correct” police came about in an effort to clarify the science of welding, the MIG acronym was retired from official use to reflect a more accurate definition. Although the term is still widely accepted, the term “MIG” did not allow for the fact that Carbon Dioxide, and to a lesser extent Oxygen is almost always used as a mixed component of the shielding gas, making it partially “active”, rather than “inert”. This led to the splinter definition of MAG: Metal Active Gas. So the GMAWbanner accurately describes both types of operation. 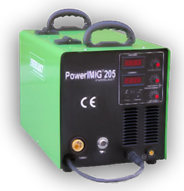 To make matters worse, many people often confuse MIG with other forms of wire weldingsuch as Flux Core which though may use the same or similar equipment, is an entirely different process.Flux core uses a hollow wire loaded with a flux that is used in place of the shielding gas that rises to the top of the weld pool and protects the metal while it is cooling. The gas is not used.Another form of wire welding that leads to further confusion is the dual-shield form of wire welding, which uses both a gas and a special flux cored wire to shield the weld.