As already mentioned, MIG welding uses a gas or blend of gases in lieu of a flux. Usually the primary component of the gas is Argon, though CO2 is usually present for most steel applications. A triple blend of Argon, Helium and O2 may be used for Stainless Steels. Whilewelding aluminum, pure Argon is generally used. 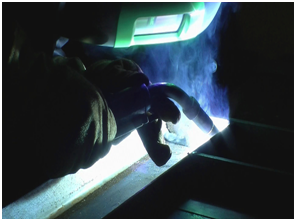 MIG is generally considered the easiest form of welding. Simply load the wire pull the trigger on the MIG gun, and weld. As long as the gun kept at a constant distance from the metal is steadily moved forward, the wire is fed automatically into the molten weld pool. How much more simple could it be? However, the confusion and misunderstanding comes in with the fact that though it is easily picked up, it is rather difficult to master. Many uniformed welders have discounted MIG welding for making weak or brittle welds. By and large, this is a rather false accusation. MIG definitely is a more rapid welding process, and does open itself up to having flaws, and voids in the weld because of it. However correctly done, MIG is just as strong as other welding processes. Though it doesn’t have the reputation of yielding pure welds like TIG welding, it can be used in almost all welding situations. The problem is that it takes correct technique and thorough metal prep to yield the best welds. Often, People who try MIGoften get frustrated by the lack of fusion that can be experienced with MIG early on in the learning process and turn to the SMAW process achieve better results without as much practice.However, with correct metal prep, and technique that results from practice, a properly welded MIG weld will hold up just as well.